Because of the defection from the clear teaching of the God of Israel, God divided the Kingdom into two parts:

a)    The Kingdom of Israel in the north under Jeroboam

b)    The Kingdom of Judah in the south under Rehoboam

The division occurred because God would not remove the Davidic dynasty from rulership over Israel – He was unchangeably bound by oath to keep His word to David. I Kings 11:32,36,39.

God made a similar promise regarding kingship to Jeroboam, but he was faithless, more anxious for present position than for honouring the God who had exalted him.  1 Kings 12:25-33;  16:26

The Kingdom of Israel continued for over two hundred years, but was finally overthrown and many of its people taken into captivity by the Assyrians (Read 2 Kings chapter 17).

The Kingdom of Judah continued for a further 134 years after the overthrow of the northern Kingdom, and was overthrown by the Babylonians in the days of King Nebuchadnezzar (2 Kings 24).  Jerusalem and Solomon’s temple were destroyed (2 Kings 25:4-10) 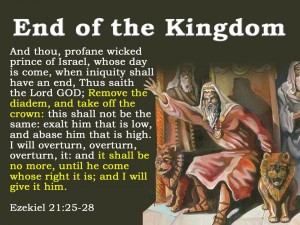 Zedekiah, the last king to sit upon the Jewish throne, received a prophecy in which he was told that the Kingdom of Judah would be overthrown “until he come whose right it is.”

Since that time there has never been a Jewish king in David’s line – and never will be until Jesus Christ who qualifies both dynastically and by divine right, takes the throne.  Kingship is the destiny of Jesus Christ (John 18:37), though he has not yet reigned as King.  This he will surely do.  (Luke 1:32,33)

The Kingdom of God

The Restoration of the Kingdom of God

The Kingdom of God over Israel was only temporarily postponed, “until he came whose right it is” (Ezekiel 21:25-27).  It was the hope of every Jewish heart, that one day Messiah would come and restore the ancient glory of the Kingdom.

Gabriel:  ” The Lord God shall give unto him the throne of his father David; he shall reign over the house of Jacob FOR EVER and of his Kingdom there shall be no end.”  Luke 1:32,33

Jesus to his disciples:

“In the regeneration when the Son of Man shall sit in the throne of his glory, ye also shall sit upon twelve thrones judging the twelve tribes of Israel”.  Matthew 19:28  See also Matthew 5:35;  Luke 19:17 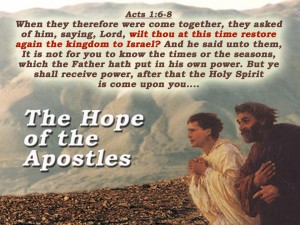 Apostles:  “Will you at this time RESTORE again the Kingdom to Israel?” Acts 1:6

Peter:  ” God shall send Jesus Christ … whom the heaven must receive until the time of RESTITUTION of all things, which God hath spoken by the mouth of his holy prophets”  Acts 3:20,21

Paul:   “I stand and am judged for the hope of the promise made of God unto our fathers unto which our twelve tribes… hope to come”  Acts 26:6,7

Paul:   “expounded and testified the Kingdom of God, persuading them concerning Jesus, out of the law of Moses and the prophets”  Acts 28:23

Formerly when Gentiles, the Ephesians believers “were without Christ, being aliens from the commonwealth of Israel, strangers from the covenants of promise, having no hope and without God in the world” Ephesians 2:12

Next Lesson:  The Life and Ministry of Christ – God sent His Son, born to a woman, to make salvation possible.