New Testament an Expansion of the Old Testament

We have already seen that Jesus Christ was in God’s purpose right from the beginning, and was specifically the “seed” in the three key promises (to Adam, Abraham and David).

Matthew 1:1 begins the New Testament by linking Jesus to his illustrious forebears – Abraham and David – in whom the inheritance rights of the Kingdom of God were first vested.

The first four books of the New Testament are called the “Gospels”.  They are the “good news” or “good tidings” of the Kingdom of God (cp Isaiah 40:9).  Each gospel thematically presents a particular aspect of the life and work of Christ.

Background:  In BC 65, Rome controlled Palestine and the Jews chafed under the Roman yoke.  They took courage in the prospects of the coming of Messiah, and waited for the time when he would release them from the Roman oppression.  They did not expect a Messiah who would first suffer and die, as was prophesied. 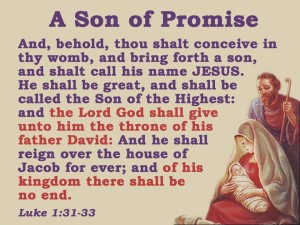 The gospels give details of the birth of the Lord, particularly Luke.  The angelic visitation and the conception by the Holy Spirit (Luke 1:26-37) clearly demonstrated that “God was in Christ reconciling the world unto himself” (2 Corinthians 5:19) and that, in his moral excellence, “we beheld his glory, the glory as of the only begotten of the Father, full of grace and truth” (John 1:14).  The only recorded incident during childhood (Luke 2:41-52) shows that he was remarkable for his knowledge, quick understanding and perception (Isaiah 11:1-4), a fact that the priests might not have forgotten when he came to manhood.

After this incident he returned to Nazareth, where he grew up in a family environment (at least four brothers and two sisters; Matthew 13:54-56).

Though Son of God, exhibiting the characteristics of his Father, he was nevertheless flesh and subject to temptation and the possibility of sin (Hebrews 4:15).  His spiritual perception, however, was keenly aware of temptation and its fruits.  In resisting temptation he was only successful by focusing on the great cause for which he had been born, overcoming the will of the flesh (self) by submitting to God in service. (Luke 22:42; Hebrews 5:7-9).

The first temptation after his baptism was similar to that experienced by Adam and Eve in the Garden of Eden (cp Genesis 3 with Matthew 4). Jesus instantly repelled each temptation by using the Word of God. He would not use the power granted to him to satisfy his need for food, or have angels support him in a demonstration, or seek control of the world by worship of anything besides God.

It was with the Jews first.  The Lord saw Judah as “lost” (Matthew 9:36; 10:6) and in need of his specific ministry (Matthew 15:24).  It was for this reason that his preaching was directed to wayward Jewry.  In his first ‘policy’ speech, the Lord drew attention to the Law of Moses, which could only judge the action of a man, and, in an authoritative manner, completed those laws with commands governing the mind, for it is the mind which controls the actions.

In this manner, the Lord was endeavouring to bring the Jews back to a sincere worship of God, not a mere external formal worship.  (Matthew 6:1-7; 15:1-9)

His teaching was with power, with authority and clarity.  (John 7:46; 5:26, 27, 36), and as such, he became a favourite with the people.  They had been prepared for his arrival by the work of his cousin, John the Baptist, so-called because he baptised those who came to him in repentance.  His teaching was reinforced by divine power, miracles, the sure seal that his ministry was of God.  (John 9:30-33; Acts 2:22)

His parables were simple stories with a profound meaning.  Once the Jews hardened their heart to his teaching, and began to plot his death, he used the method of illustrating divine wisdom by parables – to enlighten the humble and confound the proud (Matthew 13:10-17).

From those who followed the Lord, he chose twelve to accompany him in his ministry.  They were from all walks of life, from John whose family was known to the High Priest, Matthew the despised tax gatherer, Peter the impulsive fisherman, a political activist and one who became a thief.  The Lord chose them not for what they were, but for what they could become and he patiently bore with them for the sake of the great purpose God had entrusted to him (John 17:6-12).  He instructed them to witness to their Lord, starting in Jerusalem and going throughout the known world (Acts 1:8).

Finally, they will bear positions of honour in the Kingdom of God when the Lord Jesus returns to take the throne of his father David (Matthew 19:28).

Next Lesson:  The Death and Resurrection of Christ – he died to take away our sins; he lives to be our saviour and the future King.