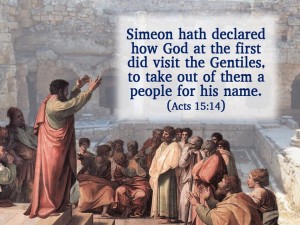 Mark 1:14-21 This event occurs after John is in prison, so is about 6 months after the events in John 1.  The four men had gone back to their jobs because John’s ministry had finished with his imprisonment.  Jesus now calls the same four men, verse 16: Simon and Andrew, verse 19: James and John

Luke 5:10,11  This is a further stage in their calling to discipleship.  This time they “left all” to follow him, including a great catch!  They used drag nets to fish, which need two boats (Luke 5:2,7).  Now, they had been drawn within the “net of knowledge of Jesus Christ” (cp John 6:44,45).         Their occupations were no longer the focus of their life.  Notice that there is no compulsion, they are not being pushed;  they are drawn of their own freewill. 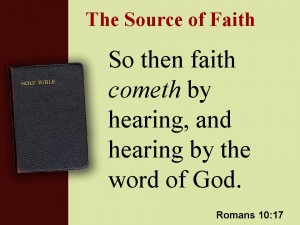 Learning about God is initially an intellectual matter.  As a result of learning the theory, the facts, we are impressed and see the need to live in conformity with the will of God – knowledge then has a marked effect upon what we do.

1. Faith comes by hearing (Romans 10:17).  The Word of God has to be absorbed by the INTELLECT.  Only by learning of God can faith be developed.  Knowledge in itself does not usually bring change, it merely intellectually equips but intellectual understanding provides the translation to moral change.

2. Faith without works is dead (James 2; Matthew 6:24-27).  Works are the natural expression of what we have come to believe. Divine teaching demands MORAL change.  We have to be emotionally affected.  But emotions on their own are fickle; an intellectual basis is necessary.

3. Faith and actions result in the whole life transformed (2 Corinthians 5:17). Then,  when he returns, Christ will PHYSICALLY change us (Philippians 3:21) 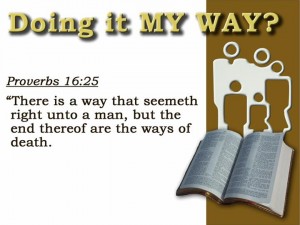 However, inevitably, the gospel net does not catch all.  Each disciple still has a choice to be in the net.  A reluctant disciple gives God no pleasure, and for this reason, the disciple is not compelled – he follows, he is eager to learn.

For this reason, God had created man and woman with the ability of choice.  In the law God gave to Adam and Eve, there is included the implicit nature of choice. (Genesis 2:17). To obey or not to obey.   This law was accepted, at first.  Adam and his wife accepted it as naturally as they drew breath.  Then one of the creatures suggested that there was another possibility.  More than that, the serpent challenged God’s declaration of the consequence of disobedience to His law.   For the first time, the serpent introduced another way of thinking into the world.   Jesus said “he was a liar and spoke out of his own reasoning”. (John 8:44)   The serpent’s reasoning became the first kind of philosophy – “we don’t have to accept God’s purpose, we have ideas of our own”.

Although there were dire consequences for following the serpent’s thinking, God in His wisdom CHOSE, in fact preferred, to have His subject creatures exercise free will in their obligations to Him.  Man ultimately honours God in believing Him and obeying His laws.  There is no enjoyment, no satisfaction for God to have “robots” do His will.   He wishes to have men and women who, through the trials and experiences of life, come to appreciate His goodness and purpose with His creation.  These He will choose to assist Him in administering the Kingdomof God and the restoration of harmony back to creation.  Such people model themselves on God, behaving wisely, kindly and honourably, according to God’s “image and likeness”.

Would-be disciples are given the CHOICE:

John 20:31 “that you might believe, and that believing may have LIFE through his name”

Revelation 2:26,27  “he that overcometh and keepeth my works unto the end, to him will I give power over the nations”

Revelation 22:14 “Blessed are they that do his commandments that they may have right to the Tree of Life..”

Romans 2:7 “God will render to every man according to his deeds;  to them who by patient continuance in well doing seek for glory, honour and immortality – eternal life”

God knows the end from the beginning

There have always been two ways, right from the beginning – (Genesis 3)

The two ways of thinking were so diametrically opposed, that God instituted a barrier between them.  “I will put enmity between….” (Genesis 3:15).  The state of being carnal, of living without God, actually prevents a person from being able to come under the rule and influence of the Word of God  (Romans 8:7).   It is possible to learn about religion;  to learn about the Bible, but while in the state of flesh (or self-will, such as the Jewish rulers in Jesus’ time), it is not possible to develop the thinking of the spirit.  Nicodemus was a classic example of this.  Though a ruler of Israel, he could not understand the message of the Lord because he spoke in spiritual terms (John 3:7-10).

In the garden of Gethsemane, the Lord Jesus had to ‘do battle’ within his own thinking.  Inheriting within himself the genetic characteristics of his mother and father, he was acutely aware of the struggle to think after God’s ways, not human self-will.   “Not my will, but thine be done” (Luke 22:42).  He triumphed because he was God-centred – “I always do the things that please the Father”. (John 8:29)

In the struggle to learn, to follow and be faithful to the Lord, we see that discipleship is not gained by a sudden change.  It takes time to learn, to see the point and make the necessary changes in life.

Once the Lord  had died, the disciples, devastated and disenchanted, reverted to their old occupation.  John 21 verse 2 shows that there were seven present, all that were there at the very beginning (four in Mark 1 and three in John 1).  Once more, the Lord appears and directs them where to gain the harvest from the sea.  This incident convinces John that this is indeed the Lord.  He remembered a similar incident three years before (Luke 5).  Once Peter knows who it is, he immediately wants to go to Christ – in Luke 5:8, he wanted the Lord to depart.  It was to be a painful time for Peter – for fresh in his memory was the denial of his Lord; Peter had been so sure that he would never deny him.  Now (verse 9), Peter stands before Christ, dripping from the sea water, and in front of the small fire.  Only a few days before, he had stood before another fire of coals (John 18:18).   Jesus knew the struggle Peter had to be fully changed (Luke 22:32), and now he was to restore him and prepare him for the great task of “feeding” the sheep, and leading the infant ecclesia of God.

On the day of Pentecost, Peter now convinced and confident in the Lord, stood up in Jerusalem and announced the death and resurrection of Christ to an astounded Jewry.  The great work had begun.

Next Lesson:  The Disciple Responds – we must become engaged in the process of salvation that God is working in us.