The Dead Sea Scrolls are a large collection of scrolls discovered in the Dead Sea area. Three Bedouin shepherds made the first discovery of the scrolls in early 1947. Eventually, some of the scrolls made their way into the hands of archaeologists and Hebrew scholars. They were amazed to find an entire copy of Isaiah, which they dated to the first century BC. At that time, this was about 1000 years older than the next oldest manuscript of any part of the Bible. About 800 different manuscripts have since been found in this area. There are manuscripts or fragments of every book in the Old Testament except Esther. Several copies of some books were found including Isaiah, Psalms, Deuteronomy and Genesis. 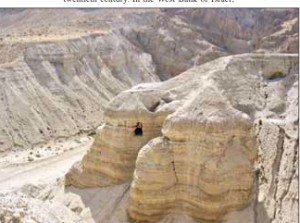 All the manuscripts are dated between 200 BC and AD 68. Until this discovery, all translation was based on the Masoretic text, which is a little over 1000 years old. The Dead Sea Scrolls are about 2000 years old! Yet when compared with the Masoretic text, there was hardly any difference. Because of their great age, they provide amazing evidence that the scribes have faithfully copied the Bible for centuries. So accurate has this copying been, that it is compelling evidence that God has preserved His Word for future generations.

“It is a matter of wonder that through something like a thousand years the text went through so little alteration. Herein lies its chief importance, supporting the fidelity of the Masoretic tradition,” wrote Millar Burrows (The Dead Sea Scrolls, p 304)

When a copy of Isaiah was discovered in the Dead Sea caves, the translators of the Revised Standard Version had already completed their translation of Isaiah. They compared what they had done with the Isaiah scroll and made a total of 13 changes. That is, in only 13 places did they think the Dead Sea Scrolls were more accurate than the later Masoretic text. All changes were minor.

The scrolls are also interesting because they help to date prophecies. Before the Dead Sea Scrolls were discovered, some critics said that prophecies about Jesus, such as those in the Psalms and Isaiah, were written after the event. The Dead Sea Scrolls proved that they were true prophecies made centuries before the time of Jesus, and we know they were fulfilled. Again, this gives further evidence that God inspired the Bible, and preserved it for us to read.