Israel took possession of the land of Canaan under the leadership of Joshua, after the death of Moses. For about 450 years, they were guided by local judges (covered in the books of Judges and Ruth). The last judge, Samuel, anointed the first two kings of Israel: Saul and David.

David was truly “a man after God’s heart” (1 Samuel 13:14), because he sought to understand and do the will of God. As a result, King David became the point of reference of all Israel’s subsequent kings. (2 Kings 18:3)

David was promised a throne and a kingdom. Organisation and rulership provide AUTHORITY. 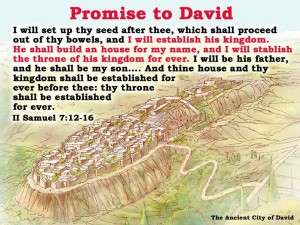 The promise made to David has a three stage development, similar to the promise to Abraham.

There are three remarkable aspects to this prophecy:
a) The son would be “set up” after the death of David (verse 12)
b) The eternal throne and kingdom would be established “before thee” (verse 16. This is a Hebraism for “in the presence of”)
c) The child would have two fathers! (verse 12,14) God would be his father as well as David. The Jews could not reconcile this (Matthew 22:41-46)

THE OATH  Psalm 132
Remember, the oath is the guarantee that God will accomplish what He has said.
verse 11 “The Lord has sworn in Truth….” – a son, a throne
verse 13  God has decreed a city where He will dwell, for ever
verse 15   God will provide care for the needy
verse 16   There will be a divine priesthood

The Kingdom of Israel was organised by David and Jerusalem established as the capital city, about the year 1,000 BC. The Ark of the Covenant, the central piece of furniture of the Tabernacle in the wilderness, was brought to Jerusalem with great ceremony and placed in a “tent” for public worship. (2 Samuel 6; 1 Chronicles 15, 16).

David planned to build a permanent house of worship, but he was not permitted to do this. The plans had been divinely given (1 Chronicles 28:11,12,19). Instead he collected the materials for its erection under the direction of his son, Solomon. 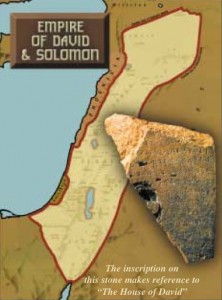 Organised by David for the Kingdom of God.

Organisation of the Priesthood, who administered the Justice, Education, Health and Government of the nation. (1 Chronicles 23, 24)

Organisation of music and choir for Temple worship (1 Chronicles 25)

The New Testament relevance of the Promise to David 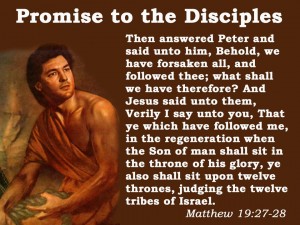 You can be personally involved!
Ruling with Christ in the Kingdom of God is offered to those who live according to God’s ways, “overcoming” sin in their personal lives. They must first rule self, before they can rule others. (Luke 19:12,17,19; Revelation 2:26; 3:21) “He that ruleth over men must be just, ruling in the fear of God” (2 Samuel 23:3) See Rev 3:21

Next lesson: The Kingdom of God Overturned – removed for its failings, the kingdom will be restored when its rightful ruler comes back.