“In the beginning God created the heaven and the earth” (Genesis 1:1). 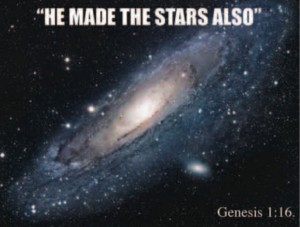 Evolution does not explain the origin of life or its complexity at the cellular level.  It affects our understanding of the purpose of life, and accountability to the Creator.  The moral implications of evolution, and the social consequence – chaos, irresponsibility – are clearly seen in society at present. Contrast the following points:

In the Creation record, God is not telling us HOW He performed creation, rather WHY He did it.

We are not told WHEN God created, it is simply “In the beginning”.  The earth was “without form and void”, or as translated by Rotherham “had become a catastrophe”.  Hence there was no life upon the earth, until the Spirit of God moved to create.

There are six days of creation, with God resting on the seventh day.   We know that each creative day comprised a 24 hour period, because of the statement “the evening and morning…”.

This principle of light and darkness is symbolic of understanding and ignorance.  We are only “in light” when we know the ways of God;  apart from that we are in darkness, even though we may be wise in this world’s estimation.  (John 3:19-21;  2 Corinthians 4:3-6)

Note:  The first 3 days are paralleled with the last three days.

Verse 16:  The word “made” in Genesis 1 which indicates “to make or create”, in this verse is a different Hebrew word, indicating “appoint”.  It relates to the earth being located in relation to the planets, so that the seasons, and day and nighttime are set in place.

Verse 24:  “Let the earth bring forth” – Evolution claims life on earth came from the sea!  All the creatures are made “after his kind”.  There is no crossing between the species. The only variation is within the species.  This is well established as genetic law.  The few species that have been successfully crossbred, are sterile, eg the mule.

THE PURPOSE OF CREATION

This verse clearly sets out God’s purpose for man and woman.   It involves how we are created, and the scope of our responsibility.

The word for God here (Hebrew “elohim”) is referring to the Creator Himself because “God said” occurs 10 times in the creation record, consistently identified by singular pronouns (he, his, I or him occur 16 times). In verse 26, God, the One who intervenes by His agents, is speaking to the angels, who assisted in creation.  It was God’s initiative to create man in His image (verse 27). “Elohim” is translated God more than 2300 times  In addition, it is used about 250 times, mostly of false gods (in the plural – see footnote *)

Man was created like God – the animals were not created in such a way.  As a result, we have the ability to understand and reason on the things of God, and so we have the capacity to become “like” the angels.    Cp Luke 20:36

This gives us the manufacturer’s specifications, the pattern for man to follow.  God is displeased when men make other images, hence the command “Ýe shall make no idols or graven images” (Leviticus 26:1).  “Some changed the glory of the incorruptible God into the image like to corruptible man…” (Romans 1:23)

No other place was promised to mankind.  (cp Psalm 115:16)  In the last book of the Bible, it is rulership over the earth which is promised “.. and we shall reign on the earth” (Revelation 5:10)

THE PURPOSE OF GOD – THE CENTRAL THEME OF THE BIBLE 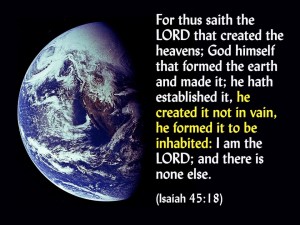 “Let them have dominion over the earth.”   Man and woman were to have management over the earth, to exercise guardianship.  This is the first declaration of the purpose of God.

Who then would achieve this?  Who would bring the world into harmony with God?

Jesus Christ, as Son of Man will take control over Creation.  “Thou made him to have dominion over the works of thy hands; thou hast put all things under his feet”  (Psalm 8:6).  Adam and Eve followed the voice of the serpent, instead of obeying the law of God.  Jesus Christ will take dominion (political control) when he returns – “there was given him (Christ) dominion and glory and a kingdom that ALL… should serve him;  his dominion is everlasting..” (Daniel 7:14, read also verses 12,27)

The New Testament expands on the teaching of Psalm 8. (Hebrews 2:6-10)

We must exercise self control and not permit sin to dominate our life.  (Romans 6:12,14)  “He that is slow to anger is better than the mighty;  and he that ruleth his spirit than he that takes a city”.   (Proverbs 16:32) ”he that overcometh, and keeps my works unto the end, to him will I give power over the nations and he shall rule them…” (Revelation 2:26,27)

The creation is now at an end.  God and His angels rest from creative work. (Genesis 2:1-3)

* Note: Alfred Norris’s book, “What Is His Name? – a Biblical Study of Divine Titles,” explains that ‘elohim’ is treated as a plural of ‘eloah’ when it is used of heathen gods; but as a singular word when used of the True God.

Next lesson:  Adam and Eve – how sin and death came; and God promised a Redeemer.