Genesis 2:4 “the generations…” This now introduces us to the record of human activity.  The creation of man and woman are given in more detail than that supplied in Chapter 1. 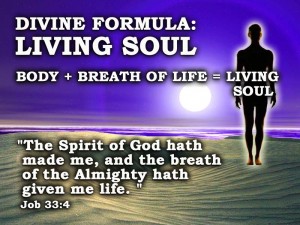 The Hebrew words for “living soul” are nephesh chaiyah

These two words are used not only of humans, but also of the animals.  The word “soul” really means body, and is translated the following way in Genesis chapters 1 and 2:

This means that animals, fish, man and woman are all souls.

The Hebrew word for “soul” (nephesh) literally means breath.  This word is translated in the following ways:

The following references show that the soul is not immortal, but simply relates to a person.

These references show that the soul involved the total person.  It was not a separate, immortal part.  When a person dies, his whole personality dies, he “knows not anything” (Ecclesiastes 9:5,6,10) Immortality is something that has to be sought for (Romans 2:7) and is only given at the resurrection (1 Corinthians 15:53,54)   The immortality of the soul is a pagan Greek idea –  the hope of the Bible is realised in the resurrection.   In fact the Bible teaches: 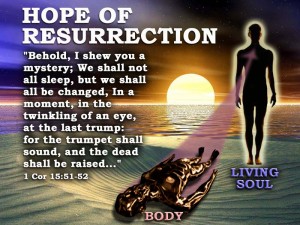 In Genesis 2:16,17 God gives a law. It is the only restriction given.  Adam had complete dominion over all, except this one tree. This law expressed the will of God.  It would ultimately test Adam’s acceptance of God’s law.

The woman is then created.  She is a unique creation, in that she is made from the living substance of the man.  This indicates that there is to be a sympathetic attachment between both, which Adam recognised (Genesis 2:3-25).  The Lord Jesus Christ spoke of marriage as being established by God from the beginning (Matthew 19:4-6). It is to form a means of comfort, help and strength for both partners in the service of God, a life-long commitment patterned on the loving, spiritual bond between Christ and his ecclesia  (Ephesians 5:25-33).

In Genesis 3, we are introduced to “the serpent” who is identified as being “a beast of the field”. The serpent was an animal and was not governed by law.  It had not been made in the image and likeness of God and therefore had no capacity to appreciate divine ideas.  It was “amoral” and could only reason on what it saw.  Death was beyond its experience.

The woman spoke the truth to the serpent, but its contradiction “You will not die” distorted her thinking.  The serpent’s lie challenged God’s authority.   In being tempted, the woman was affected in three specific ways, which became the three principles of temptation affecting humankind.

The immediate consequence of sin was that the man and woman both felt ashamed and hid themselves (verses 7,8).  Their relationship with the LORD God was affected.  What happened to the dominion man had been given?  He had given it to an animal.  Because he had listened and followed the serpent’s lie.  The danger is that our minds will be corrupted from the true teaching of God – false teaching (2 Corinthians 11:3)

Man and woman are now doomed to death.

What does God do?

THE PROMISE – There is a way out!

God did not leave Adam and Eve without hope of ever escaping the position they had put themselves into.  In this verse, he made a remarkable promise concerning Eve.  Three key ideas in this verse:

Two parties would be involved:

This verse shows that there are two classes of people;  the woman and her “seed”, and the serpent and his “seed”.  The woman represents those of the way of the truth (because she spoke the truth), and the serpent represents those who challenge God’s way. “I will put enmity” – God puts division between the two groups to prevent the corruption of the true seed. The thinking which opposes God cannot be converted.  It must be put to death.  (Romans 8:7)

The enmity would be a ‘battle to the death’ as it were.  The woman’s descendant would receive a temporary wound from the serpent’s descendant (wound in the heel), but ultimately, the serpent would be wounded fatally in the head.   God will not allow sin to triumph for ever!

The singular personal pronoun “his” shows that, finally, one descended from the woman would become the saviour.  Jesus was literally the seed of the woman, not of the man, for God was his Father.  The conflict was resolved in the life (and death) of Jesus.  By perfectly obeying God, Jesus Christ refused to come under the influence of sin (Hebrews 2:14; 5:7-9; Revelation 3:21) or to follow self-will (Luke 22;42).  Though temporarily wounded by death (the effect of sin, Romans 8:3), ultimately, he would destroy sin and death for ever. (Revelation 1:18)

As a result of their actions, a change resulted in the nature of Adam and Eve.  This change occurred in three areas:

“The eyes of both of them were opened, and they knew that they were naked”.  They were now aware of what sin was and the Bible teaches that from that time forward, human nature has had a bias toward sin.  This mental change caused:-

“They were no longer “very good”, but were estranged from God because of sin.  Finally, the punishment that God had clearly stated became a reality, the result being:-

They began to die, as God had said they would – “for in the day that thou eatest thereof, dying thou shalt die”.

From then on, sin reigned like a king over mankind (Romans 6:12)

Death was a penalty imposed by God once sin had become a fact.

What was a penalty to Adam, became to all others a law of their nature.

Adam’s descendants inherited not only mortality, but also a proneness towards sin (Jeremiah 17:9).  All men, left to themselves, will inevitably sin.

Though death would claim Adam and all his descendants, Christ can redeem us (Romans 5:18,19). In the promise of Genesis 3:15, Adam recognised that through a woman, not man, the saviour would come, and so he recognised that Eve was “the mother of all living”.

“The way of the tree of life”  Revelation 2:7, is still open to those who walk in the way of Truth.

Eve assumes that her firstborn son would be the promised seed but they were divided by two ways of thinking which had its outworking in religious controversy.

Genesis chapters 4 and 5 give the genealogy of the two seeds, Genesis 4 of Cain and Genesis 5 of Seth (who replaced the slain Abel).  The conflict between the two seeds, climaxes between Lamech (Gen 4:23,24) and Enoch (Gen 5:22).  Both were contemporary.  Lamech threatened to kill Enoch for speaking against his ungodly practices (eg Lamech introduced polygamy).  Read Jude verse 14,15.  This conflict would result in violence filling the earth, and God’s judgment of a flood (Genesis 6).

Next Lesson:  The Promise to Abraham – the foundation of the gospel. God promised Abraham territory, descendants and an Heir to bless all nations.