Prelude to the big one prophesied at the return of Christ

Earthquake activity is increasing. In October (07), a geologist from the University of Canterbury held public lectures in Wanaka, Cromwell and Queenstown to warn the public of the likelihood of an 8+ force quake in the Southern Alps.

The conflict in the Middle East will widen and all nations will be gathered to Jerusalem to battle.  The ancient city will fall and many Israelis will be deported. Then the Lord will arrive to deliver his people.  He will stand on the Mt of Olives (east of Jerusalem) and trigger a massive earthquake, splitting the mountain apart by some 60 kilometres.   In the build up to this event, quakes are occurring in Mt Carmel, Mt of Olives and the Jordan valley (the Dead Sea is the lowest spot on earth). Geologists are constantly monitoring the situation. 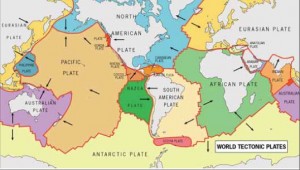 The Jordan Valley depression is linked to the Great African Rift Valley.  On this same fault system, a Red Sea Island recently exploded, and in Ethiopia, an area of land has subsided some 120 metres over recent years, with lava lakes and cracks occurring in the earth’s crust.

The Bible prophesies that God will arise and “shake the earth.”  The Lord “shall stand on the Mt of Olives which faces Jerusalem on the east and the Mount of Olives shall be split in two from east to west making a very large valley. “ (Zech 14:4)  Among the many effects of the earthquake will be new outlets for the Nile and Jordan Rivers, cleansing the Dead Sea in order to support fish and creating new waterways to flow through Israel and Arabia.  The cities of the nations will fall. (Rev 16:19).

The Lord is coming to take over the management of His world, one government and one religion based in Jerusalem.  Civilisation as we know it will be destroyed preparatory to the building of a new society.  The Lord will reign from Jerusalem and people will be resettled in villages and rural towns.

Are you ready for His coming?