Jesus and His Apostles preached the Gospel of the Kingdom 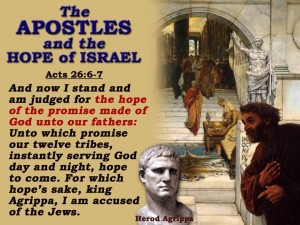 “And he said unto them, I must preach the kingdom of God to other cities also: for therefore am I sent” (Luke 4:43).

“And it came to pass afterward, that he went throughout every city and village, preaching and showing the glad tidings of the kingdom of God: and the twelve were with him” (Luke 8:1).

“When they believed Philip preaching the things concerning the kingdom of God, and the name of Jesus Christ, they were baptized, both men and women” (Acts 8:12).

“And Paul dwelt two whole years in his own hired house, and received all that came in unto him, Preaching the kingdom of God, and teaching those things which concern the Lord Jesus Christ, with all confidence, no man forbidding him” (Acts 28: 30,31).

God’s Kingdom will be a divine political Kingdom on Earth 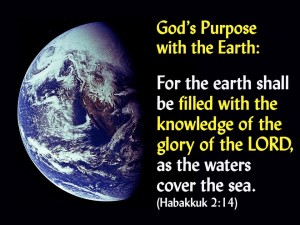 “And in the days of these kings shall the God of heaven set up a kingdom, which shall never be destroyed: and the kingdom shall not be left to other people, but it shall break in pieces and consume all these kingdoms, and it shall stand forever “ (Daniel 2:44).

“And the seventh angel sounded; and there were great voices in heaven, saying, The kingdoms of this world are become the kingdom of our Lord, and of his Christ; and he shall reign forever and ever”(Revelation 11:15).

“And there was given him dominion, and glory, and a kingdom, that all people, nations, and languages, should serve him: his dominion is an everlasting dominion, which shall not pass away, and his kingdom that which shall not be destroyed” (Daniel 7:14).

The Kingdom of Israel was God’s Kingdom in the past

David said, “And of all my sons, (for the LORD has given me many sons,) he has chosen Solomon my son to sit upon the throne of the kingdom of the LORD over Israel” (1 Chronicles 28:5).

“Then Solomon sat on the throne of the LORD as king instead of David his father” (1 Chronicles 29:23).

“And now you think to withstand the kingdom of the LORD in the hand of the sons of David” (2 Chronicles 13:8).

The Kingdom will be restored to Israel 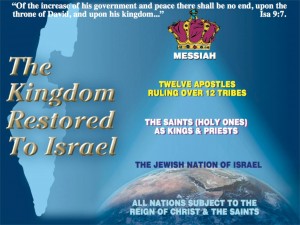 “ When they therefore were come together, they asked of him, saying, Lord, will you at this time restore again the kingdom to Israel?” (Acts 1:6)

“The LORD shall reign over them in mount Zion from henceforth, even forever. And you, O tower of the flock, the stronghold of the daughter of Zion, unto you shall it come, even the first dominion; the kingdom shall come to the daughter of Jerusalem” (Micah 4:7-8).

The angel said to Mary, “And, behold, you shall conceive in your womb, and bring forth a son, and shall call his name JESUS. He shall be great, and shall be called the Son of the Highest: and the Lord God shall give unto him the throne of his father David: And he shall reign over the house of Jacob forever; and of his kingdom there shall be no end” (Luke 1:31-33).

“And He shall send Jesus Christ, who before was proclaimed to you, whom Heaven truly needs to receive until the times of restoration of all things, which God has spoken by the mouth of His holy prophets since the world began” (Acts 3:20-21).

“For the Lord Himself shall descend from Heaven with a shout, with the voice of the archangel and with the trumpet of God. And the dead in Christ shall rise first” (1 Thessalonians 4:16).

“And I saw thrones, and they sat on them, and judgment was given to them. And I saw the souls of those who had been beheaded for the witness of Jesus and for the Word of God, and who had not worshiped the beast nor his image, nor had received his mark on their foreheads, nor in their hands. And they lived and reigned with Christ a thousand years” (Revelation 20:4). 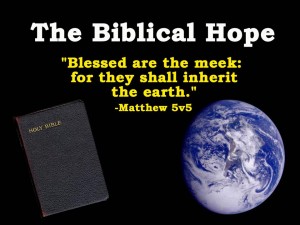 Bishop Gore wrote, “The expectation of the New Testament is still that of a return of Christ to earth, a heavenly kingdom to come on earth.” (Belief in God)

Edward Gibbon wrote, “The ancient and popular doctrine of the Millennium was intimately connected with the second coming of Christ. Christ, with the triumphant band of the saints, would reign on earth till the appointed time for the last and general resurrection. But when the edifice of the church was almost completed, the temporary support was laid aside. The doctrine of Christ’s reign on earth was at first treated as a profound allegory, was considered by degrees as a doubtful and useless opinion, and was at length rejected.” (abridged from Decline and Fall of the Roman Empire, chapter 15)

“Faith in the nearness of Christ’s second advent and the establishment of his reign of glory on the earth was undoubtedly a strong point in the primitive Christian Church. After the middle of the second century these expectations were gradually thrust into the background. These wild dreams about the glorious kingdom of Christ began to disturb the organization which the Churches had seen fit to introduce. Augustine was the first who ventured to teach that the Catholic Church, in its empirical form, was the kingdom of Christ, that the millennial kingdom had commenced with the appearing of Christ, and was therefore an accomplished fact. By this doctrine of Augustine’s the old millenarianism, though not completely extirpated, was at least banished from the official theology.” (abridged from article on Millennium in Encyclopedia Britannica, 14th edition)

“Augustine, in his City of God, identified the Millennium with the history of the Church on earth. (His book) lays the foundation for the characteristic medieval conception of the Kingdom of God, that of an omnipresent Church.” (abridged from Hasting’s Bible Dictionary)

The Church is not the same as the Kingdom

The New Testament Greek words Ekklesia (meaning people called out of the world) and Basileia (meaning a royal dominion) are not synonymous or interchangeable terms.

The saints now, instead of being kings, are exhorted to pray for kings, to honour kings, to be subject unto them. When the saints become kings, they will rule the world in the place of those to whom they have been in subjection.

Members of the ecclesia can be cast out, but those who inherit the kingdom are not removed – the inheritance is eternal.