A clear conclusion can be drawn from some obvious facts of the case.

1. Why did the disillusioned men, who scattered at his death, begin to spread the story that he had risen? For it is plain that they neither expected nor received personal gain for their work.

At Christ’s arrest and death, the disciples were frightened, fleeing, disappointed men. A few weeks later they were fearlessly proclaiming that their Master was alive again – actually raised from the dead. They proclaimed this, even though the authorities persecuted them. Forbidden by the Jewish council to speak at all in Jesus’ name, Peter and John replied that it was God to whom they must hearken and they had to speak what they had seen and heard. In a few years Christianity spread through the civilised world, finally ousting Paganism as the State religion. The apostles smiled at their sufferings and embraced violent death – and they had nothing to gain from it unless their claim was true. They must have received completely convincing evidence that Jesus was alive again – evidence so strong that it compelled them to proclaim the news in public, without fear of what the enraged authorities would do to them.

2. Why did they preach, above all things, to Gentiles at a very early stage in their ministry? For it would not have occurred to Jewish patriots, which the disciples were, to do this without higher direction of a very compelling kind.

Such a thing as preaching to Gentiles was startling because the Jews, as the chosen people, thought God would have no dealings with Gentiles, whom they despised as ‘dogs.’ Yet Jesus had foretold it, saying that he had ‘other sheep, not of this fold’ – John 10:16. Jesus likened himself to Jonah who, after a ‘burial’ of three days and three nights, came out to preach to Gentiles. Isaiah predicted that Christ would be a light to the Gentiles (49:6). But Jews, whether enemies or disciples, did not expect it. However Peter preached to the Roman, Cornelius, and Paul became Apostle to the Gentiles. What changed them? What made them do this thing so contrary to their Jewish exclusiveness? There is only one adequate answer. No one but the risen Lord could have given the command, ‘Go … teach all nations’ – Matthew 28:19. Christ, like Jonah, was entombed three days and three nights. Then he rose, and commanded his disciples to preach to the Gentiles.

3. Why did the Jewish authorities spread the story that the disciples had stolen the body from the tomb? For they did spread the story and it was current among the Jews in the early centuries.

It is beyond question that the grave was empty. Not only did his friends observe it, but also his enemies did not deny it. The women did not go to the wrong tomb because the authorities would soon have pointed out the right one. The claim that the body was stolen shows that it was missing. Had the Jews known where it was they would have produced it to destroy the apostles’ claims. Could the disciples have stolen it? The Gospels show how afraid and heartbroken they were at their Master’s arrest, trial and death. In their distress were they ever likely to attempt the theft? And what ever could they have gained by it? If this explanation is true, their work was based on a fraud, which is inconsistent with their character, the moral standard of their teaching, and the fact that they were martyred for their faith. Men do not die for a fraud. Jesus could not have swooned on the cross, revived in the cold tomb, somehow escaped from it, and, sorely wounded, meet his frightened disciples and convince them he was immortal. The apostles’ claims to have seen, spoken to and handled Jesus do not belong to such circumstances. The apostles were neither deceived nor deceivers. The only explanation that fits the facts, providing convincing answers to all three questions above, is that Jesus rose from the dead. 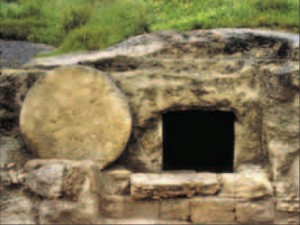 THE CONSEQUENCES are far-reaching and demand our utmost respect. This man has been ‘declared to be the Son of God with power … by the resurrection from the dead.’ During his mortal lifetime he spoke as one having authority. His authority has been vindicated in a manner quite outside the power of man to perform. Shall we listen to human critics, or take our stand with One who believed the Old Testament implicitly; and whose attitude to God’s Word was vindicated when God raised him from the dead?

(An extract from the writing of A D Norris)