Just before his ascension, Jesus commissioned his apostles to continue the work he had begun.  “Ye shall be witnesses unto me, both in Jerusalem and in all Judea, and Samaria, and unto the uttermost part of the earth“.  (Acts 1:8)  The book of Acts shows how the work progressed.

Seven days after Jesus ascended, they began the work with the Jews at Jerusalem, at the Jewish feast of Pentecost.  3,000 Jews, who knew the Scriptures, came to understand that Jesus is their Messiah and were subsequently baptised.  (Acts 2:36-42)

In Judea and Samaria

Persecution, initiated by the Jewish Council against the infant congregation, caused them to flee through Judea and Samaria, which effectively resulted in the light of the Gospel being taken to other areas (Acts 8:1).

The Uttermost parts of the Earth

Through the activity of the Apostle Paul and his companions, the work was extended right across the Roman Empire, firstly to Jews and also to the Gentiles, those who were “afar off” from God’s covenants of promise to Israel (Acts 2:39;  Ephesians 2:12,13)

The Giving of the Holy Spirit

Jesus, realising that his disciples were not yet equipped to the task before them, promised the gift of the Holy Spirit as a “teacher” and a “remembrancer” (John 14:26) to guide them into all truth (John 16:13).  It also confirmed the work as being of God, by signs and miracles.  The gift of languages enabled the preaching to be undertaken immediately, as the Jews at Pentecost found to their amazement (Acts 2:5-11).

Thus the Holy Spirit would guide the teaching and establishment of God’s Truth in communities or ecclesias.  This is clearly explained in Ephesians 4, where the apostles and teachers are equated to those God separated to be teachers in Israel of old.  There had been two outpourings of the Spirit, at Sinai when Israel was constituted a nation, and now at Pentecost, when believers were called out to form the ecclesia.  Ephesians 4:8 quotes from Psalm 68 which recounts the events that took place at Sinai.  At Sinai “God gave the word” (Psalm 68:11).  At Pentecost, God “gave apostles, prophets, evangelists, pastors, teachers..”  The spirit teaching work was to edify and build up the immature body of Christ till maturity was reached (Ephesians 4:12-16), and the body “fitly joined” could operate in fulness.

Once this was achieved, and the books of the New Testament were written by Holy Spirit guidance, the Holy Spirit gifts were no longer needed.  “When that perfect (state) is come, then that which is in part (the various gifts) would be done away” (I Corinthians 13:9).  The word “perfect”  is in the neuter gender, and so does not refer to a person.

The Organisation of the Ecclesia

Only two ceremonies were adopted:-

This had been instituted by Christ a few hours before his death, to be kept in memory till he came. (Luke 22:15-20)  It was kept on the first day of the week (Acts 20:7), and was an integral part of the working together of the body of Christ.  (Ephesians 4:16)

“They continued steadfastly in the apostles’ doctrine and fellowship and in breaking of bread and in prayers” (Acts 2:42)

The number of believers grew quickly and considerably, even to Jewish priests being converted (Acts 6:7).  The opposition also grew.  Jewish believers in Christ, were cut off from their brethren and friends and denied the normal social welfare support when they left the synagogue, so it became necessary to supervise the practical daily care of those who needed it.  (Acts 6:1-7)

Apostles were appointed by Christ personally.  There is no modern counterpart to the position of apostles (Acts 1:20-23).

The apostles chief function: to preach the Word of God.  They refused to act in the “daily ministration”.

The Apostles directed the multitude, or the members of the body of Christ (Acts 6:3-6) to appoint those seven who would serve them.  In this manner, appointment was placed in the hands of the whole congregation, which precluded a hierarchical organisation.  Seven men were appointed by the congregation to “minister” or serve (Acts 6:3). This was a committee whose chief function was to “serve tables” – or assist in the “daily ministration” (Acts 6:1,2)

Later Paul instructed that selection of ministers was to be made on the basis of a personal godly character (1 Timothy 3). 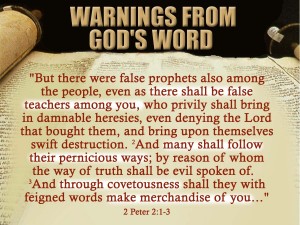 In spite of the earnest preaching of the Apostles, problems arose in the ecclesias.  Paul sadly warned “Wolves shall enter in…” and “Of your own selves shall men arise, speaking perverse things…” (Acts 20:38-40)

This resulted in believers being subverted, as was Eve from the way of God (2 Corinthians 11:2-4,13).  It was the story of the Garden of Eden all over again!  The Greek philosophy of the world began to make inroads into the Hope of Israel (cp 1 Corinthians 1:20-24) and as Paul warned “the time came when they did not endure sound doctrine” (2 Timothy 4:3).  Peter’s warning, showed that the defection would be widespread, and would result in a religion of “merchandise“, of power and property. (2 Peter 2:1-3)  Ultimately, a church arose with political interests who persecuted the true believers (Revelation 12:17; 13:4-8).

This corruption of early Christianity is acknowledged by historians.  Augustine (c396) a “church father” assisted in this corruption.  “His mind was the crucible in which the religion of the New Testament was amassed completely fused with Platonic tradition of Greek philosophy;  and it was also the means by which the product of this fusion was transmitted to the Christendoms of medieval Roman Catholicism and Renaissance Protestantism”  – Encyl Britannica. 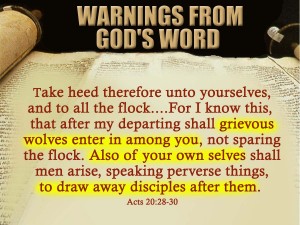 With such a gloomy outlook, Paul directed personal responsibility in “taking heed to yourselves” in much the same way as Jesus had warned (Luke 21:34) along with Moses and Joshua.  The shocking thing was that the defection from God’s way would come chiefly from the leadership, for the purpose of achieving a personal following (Acts 20:17,29,30)

When Christ returns, all who know of him will be held to account – “he hath appointed a day in which he will judge the world in righteousness by that man whom he hath ordained: of whom he hath given assurance unto all, in that he hath raised him from the dead”.           (Acts 17:31)

The coming of Christ and the restoration of the Kingdom of Israel has been the hope of believers of all time.  The last words of the Bible echo this hope – “Surely I come quickly.”