God is in control

About 606 BC, young Daniel was taken from Judah into exile in Babylon to be trained in the service of King Nebuchadnezzar. He and his three companions showed great courage and trust in their God.

At this time, God’s first Kingdom on earth, established by David and Solomon, was overthrown for disobedience. Daniel was given visions about world events affecting Israel, revealing a succession of empires during the times of the Gentiles until the restoration of the Kingdom of God on earth. During the long duration of the kingdom of men, God’s power would control events behind the scenes. The theme of Daniel’s prophecy is:

“The Most High rules in the kingdom of men, and gives it to whomever He will, and sets up over it the lowest of men” (4:17).

Daniel 2: The Succession of Empires

Nebuchadnezzar had a vivid dream and called for his advisers to explain it. Only Daniel could do so, because the dream and its meaning were revealed by God. Daniel reminded the king that the dream was of a large statue composed of different metals. Then a stone, not quarried by human hands, struck the image on the feet and destroyed it. The stone grew into a great mountain and filled the whole earth. Daniel told the king that the four metals of the image represented four empires that would arise 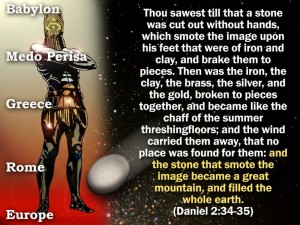 The statue’s head of gold represented the king himself and his kingdom of Babylon (2:31-35). This lasted for 70 years. Subsequent empires would be stronger, but not so wealthy and autocratic.

Then, the belly and two thighs of bronze referred to the Greek empire (2:39; 8:21), which began with Alexander the Great and later became the Kings of the North and South in relation to the land of Israel.

The fourth power rules both West and East

Two legs of iron referred to Roman Imperialism, divided into East and West (2:40; Luke 2:1; John 11:48). From the conquest of the Grecian kingdom of Egypt in 30 BC to the end of the Holy Roman Empire in AD 1806, iron is a fitting symbol of Roman imperialism.

Feet of iron and clay referred to the nationalist phase opened in the Napoleonic era; then and later the forces of democratic nationalism produced the strong and weak nations of modern Europe. Remnants of iron imperialism endured into the 19th and 20th centuries. As potter’s clay is pliable, so populations are moulded to the will of their leaders.

Toes grow out of the feet, and are all those nations opposed to the Lord Jesus Christ when he returns.

A complete divine takeover of this world 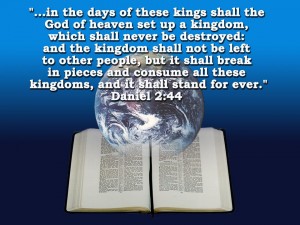 The stone that smote the image on the feet, and broke up the whole edifice of human rulership, is the Kingdom of God that will replace the kingdom of men. With Christ ruling from Jerusalem, divine authority will be extended throughout the globe.

Israel’s history confirms the accuracy of this prophecy. Subjected to that succession of empires and scattered into all countries, the people of Israel are now back in their land, a sure sign of the nearness of the Kingdom of God.