No greater evidence that God keeps His word is available than the fact of the existence today of the Jews as a nation. Scattered for 2500 years throughout the world with powerful forces determined to wipe them out, yet they are restored to the homeland because, in spite of all their sins against Him, God refuses to break His covenant with their forefathers and with them. The presence of even a small number of Jews in the world, after all the centuries of diabolical effort to exterminate them, would alone be sufficient assurance that God will keep His promises, whether good or bad, to individuals or to nations.

Leviticus 26 and Deuteronomy 28 are remarkable prophecies given by the Holy Spirit through Moses concerning the future of the nation of Israel, which he had led out of Egypt to be the people of God’s choice – the blessings for obedience and the punishments for disobedience. These have been fully confirmed in the subsequent history of the Jewish nation. These chapters abound in prophecies of what God would do for (or against) His people if they did (or did not) meet His conditions; each of which prophecies were literally fulfilled in the following centuries. God keeps His word, whether for us or against us – it all depends on us. 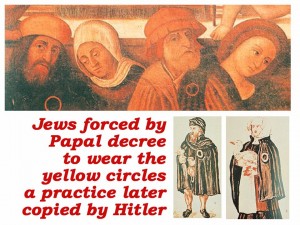 Before Israel was a nation in the land, God revealed its future in such detail as to witness to every major vicissitude of their history since. In Leviticus 26, God promises His people blessings for obedience, or punishments for disobedience.

If they kept His statutes, the blessings God offered were ample crops and security to be enjoyed in the Promised Land (v 1-13). But if they turned away and broke God’s covenant, He would discipline them with punishments fitted to the level and kind of disobedience (v 14-39). Yet God would never cast them away and would eventually restore them to the land promised to Abraham, Isaac and Jacob (v 40-45).

Before he died, Moses spoke to the next generation, 38 years later, and provided even more detail, in Deuteronomy 28, of what would happen to the nation. Again are set forth blessings for obedience (v 1-14), many more curses for disobedience (v 15-68) and ultimate restoration (chapter 30).

An amazing amount of detail of what was to come

Particularly impressive in Deuteronomy 28 is the sequence of the predictions borne out in subsequent history.

1. Agricultural, domestic and public calamities, while in the Holy Land – v 15-24.

3. Judah, the southern kingdom and its king, carried away to exile in Babylon – v 36

4. Proverbial contempt for Jewish people among all the nations of exile – v 37

5. Jews returned from Babylon are kept in subjection to the Nations – v 38-47

6. Roman armies quell the Jewish Revolt in a terrible war of sieges – v 48-52

7. Extremities of famine during the Roman siege of Jerusalem – v 53-57

8. Expulsion from Judea and dispersion into all nations of the earth – v 58-64

The nation had a king (v 36) at the time of the Babylonian captivity, but no king is mentioned in the prediction of the Roman conquest – as they said, “We have no king but Caesar” (John 19:15). 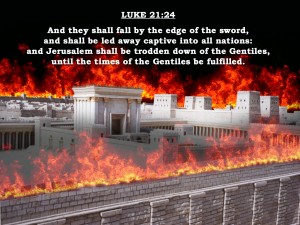 Jewish history is full of literal fulfilments of the details of this remarkable chapter.

“Here, then, are prophecies delivered above 3,000 years ago, and yet being fulfilled in the world at this very time … I must acknowledge, they not only convince, but amaze and astonish me beyond expression; they are truly as Moses foretold they would be, ‘a sign and a wonder for ever’ (v 46)” wrote Bishop Newton. 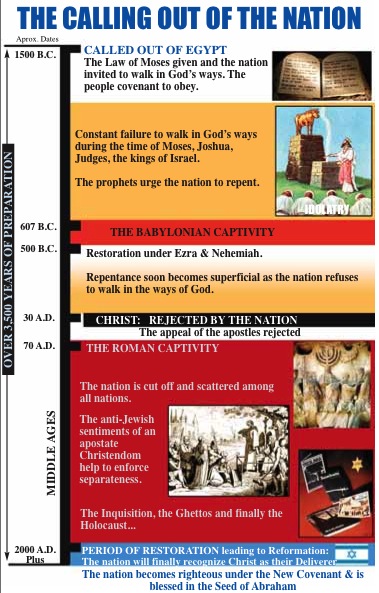